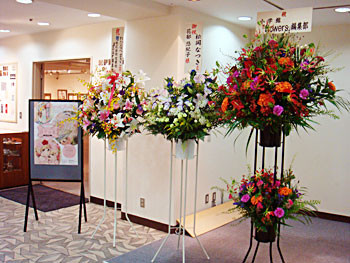 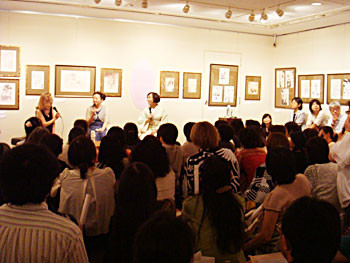 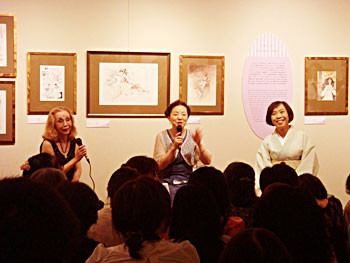 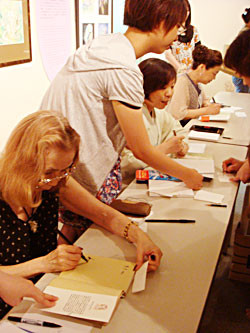 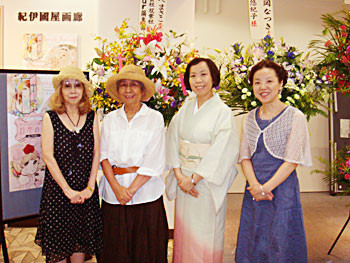 The first day we received many flowers.
It made the atmosphere nicer.

Of course the venue was packed with 140 people. Thank you for coming in such hot weather.

At the talk show they spoke about their memory of first meeting each other etc and also about their works.

There was a key word which was “sister”.

When Watanabe sensei became busier she asked her sisters to help her. Even now one of her assistants is her sister.

Also Takemiya sensei's sister has been her manager. She is even well known amongst her sisters fans.

As you know Hatsu sensei is Kai sensei's sister. She was also Kai sensei's assistant so if Kai sensei didn't die so early she would have became her assistant she said. She also added “My sister was living half in her dream, she was such a clumsy person”.

Anyway I am sure Hatsu sensei was going to be a manga artist but I could tell that she was worried about her sister and more than that she respected her sister. You can tell that from how she kept her sister's work so well and in such good condition.

Maybe we all should have a well organized sister.

Actually I borrowed my sister's clothes to look a little bit more fashionable than usual for the talk show .(I couldn't wear it in the end because she is skinnier than me anyway.)

Well I thought I should look better next time as everybody looked good.

Hatsu sensei was wearing such a lovely kimono, Takemiya sensei had an amazing dress. Watanebe sensei's dress reminded me of her manga, pink and soft. I couldn't believe that she is over 80 years old.

There was autograph signing afterwords.

Also we had Imamura Yoko sensei from the same exhibition in 2007 and Mochiduki Akira sensei too.

The exhibition at Kinokuniya gallery in Shinjuku will be on until 30th Monday, and it will be held at manga museum from 27th February until 31st March.