It was 10th anniversary this year since Takemiya sensei and Kyoto Seika University started Genga'(Dash) project. To follow the track of this project we showed 14 artists works specially for this occasion. So this is how the first day was.

Chiba Tetsuya sent us flower we are hoping him to join our Genga'(Dash) project. 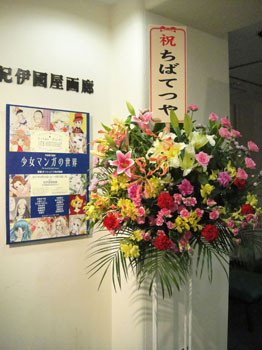 So this is how the outside gallery was with works from each artists. 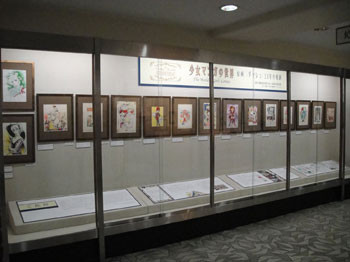 It was such an opportunity to see the pioneers of Shojo manga (girls comic) together. 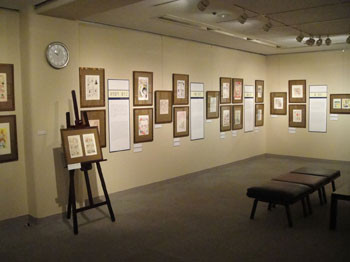 There were lots of books and goods in the shop. 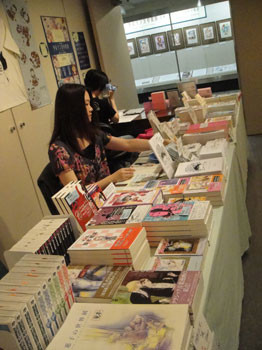 There were self publishing books of Mizuno Hideko and Tomoe Satoo that you usually can buy only online. Matasumoto Katsuji's new Japanese towel tenugui was in the shop for the first time. Takahashi Makoto's new picture book was very fascinated.

Also there was a talk show on the first day with Imamura Yoko, Tomoe Satoo, Mizuno Hideko and Takemiya Keiko who is the leader of this project. 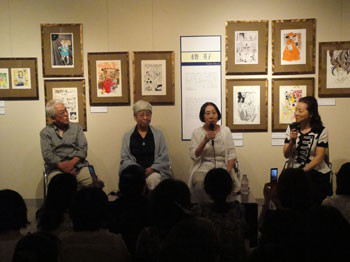 Time flew past very quickly throughout the talk and the most interesting thing was about re-production of manga. You cannot buy those books that are out of publishing. To be able to publish those copies again, Mizuno and Tomoe decided to re-publish them by themselves.

Even re-publishing has been popular in Japan it's hard to get all masterpieces to be published again. Imamura's "Chako-chan's diary" is something people would like to read in such hard time like now.

"When we were doing well publishing the series on magazines the story lines were easy so even little kids could enjoy them. As we lost those simple mangas young people started getting away from manga culture so we need to give a chance to those old mangas to be read again."

As many people are expecting it we hope our Genga'(Dash) project would push the re-production of manga.

In the end of the talk those four who did the talk made autograph together for a lucky audience.

This is how we did a game to pick lucky one up. 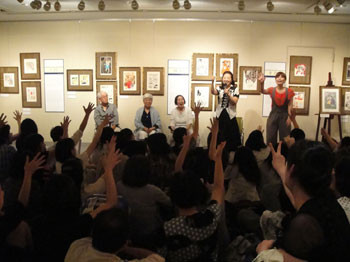 So this is the precious moment of them doing autograph. 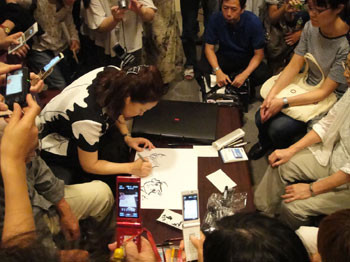 Such a rare thing to win. 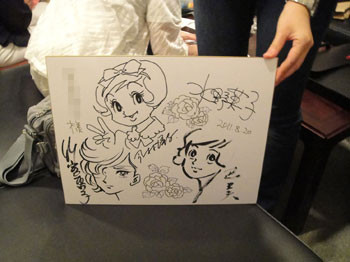 This exhibition is going to be exhibited at Kyoto International Manga Museum in around November. We are thinking of making a catalogue for the shop.
This exhibition will also be shown at Pompidou Centre in Paris next year around in the end of February to early March!

We will keep updating information internationally in the future so please keep your eye on our project!